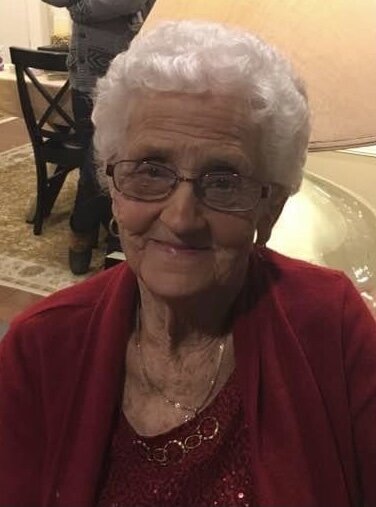 Please share a memory of Marian to include in a keepsake book for family and friends.
View Tribute Book

Marian G. O'Neill-Shilling (House), of Audubon, formerly from Lafayette Hill, passed away after a long illness at the Meadows in Shannondell. She was 98. Marian spent her formative years in Flourtown, PA. where she was raised with her three siblings, Charles, John William and Gladys, who passed before her.

Marian is survived by her husband Elwood Shilling, whom she married in July 1985. They spent many years traveling the US and Europe before and after retirement and settled down for a few years in Florida. She was an avid and excellent golfer.

Marian was predeceased by her first husband Peter A O'Neill (1981) and a son Robert M. O'Neill. Marian and Pete had a family full of boys, (6) Peter Jr., Bob (Peggy), Jim (Kate), Dennis (Linda), Chuck (Allison), Brian (Gail), before they welcomed their 7th child, a girl, Mary Pat Moyer. It was a full household but Marian, with her abundance of energy, still found time to be a caretaker a few times over to various family members in their time of need.

Marian was a longtime bowler with the St. Philip Neri women's bowling teams and won many trophies for her excellent averages. She also enjoyed many summers in Brigantine with her family and friends and trips to the casinos in her later years. Anyone joining her at the casinos realized how very lucky she was. Throughout her life, Marian was a person who made friends easily; her photo albums, address books, and birthday card lists were ever growing.

To send flowers to the family or plant a tree in memory of Marian Shilling, please visit Tribute Store
Saturday
11
September

Share Your Memory of
Marian
Upload Your Memory View All Memories
Be the first to upload a memory!
Share A Memory
Send Flowers
Plant a Tree