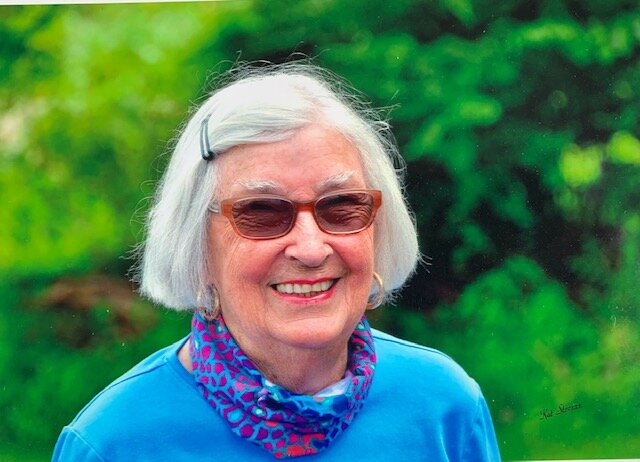 Please share a memory of Virginia to include in a keepsake book for family and friends.
View Tribute Book

Virginia T. (Ginny) Simonin, 96 of Lafayette Hill, PA., passed away on December 29 at the Hill at Whitemarsh.

Ginny was born on September 14, 1926 in Trenton New Jersey to Alice Reid and W. Scott Taylor a third generation pharmacist. She met her future husband Robert W. Simonin at the beach in Bay Head NJ where Ginny’s family owned a house. They were married on April 9, 1949 and resided in Wyndmoor until 1962 when they relocated to Charlotte, NC for Bobby’s work with Dow Chemical Co. In 1968 they returned to the Philadelphia area and built a house in Ambler, PA. After Bobby passed away in 1979 Ginny returned to Wyndmoor where her home on Ardmore Avenue was a frequent stop on many Horticultural and Garden Club tours. Later in life she moved to the Hill at Whitemarch and was one of their first residents.

An avid tennis and bridge player throughout her life Ginny loved to travel and was able to share her passions for tennis, flower arranging and gardening with friends in South Africa, Italy, England and France. At age 90, Ginny travelled to London for a birthday celebration with her granddaughter who was attending school there.

In 1980 Ginny became serious about the Philadelphia Flower Show. She was a contestant in every show from 1975 to 2017 and a perennial blue ribbon winner in the Miniature Mass Arrangement Category. Of all the awards and commendation she was given over the years the one that stood out most for her was a very special Certificate of Excellence from the Garden Club of America for a Flower Clock which consisted of flower minute and hour hands. Also possessing a natural eye for interior design she was employed for many years as a lead decorator for Design and Supply, an award-winning Philadelphia company specializing in boutique and luxury hotels around the country.

Ginny was a lifelong member of the Philadelphia Cricket Club and a member of the Wissahickon Garden Club for 52 years. She was also an active member of St. Thomas’ Church and could often be found arranging flowers for the Sunday service.

Most of all, Ginny dearly loved her family, community, and the many many friends she knew throughout her life. She had a genuine “zest” for life and her positive and generous nature made her loved by all who knew her.

Ginny is survived by her son Taylor Simonin of New York, NY, her granddaughter Dr. Lane Simonin of New York, NY, two nieces, Louise Kass of Perkasie, PA and Mary Arditti of Dana Point, CA and one nephew, Scott Taylor of Yardley, PA. She was preceded in death by her husband Robert W. Simonin in 1979. There will be a memorial service on Saturday January 28th at 11:00 AM at St. Thomas’ Church, Whitemarsh. The service will be followed by a reception in the Parish House.

To send flowers to the family or plant a tree in memory of Virginia Simonin, please visit Tribute Store
Print
Saturday
28
January