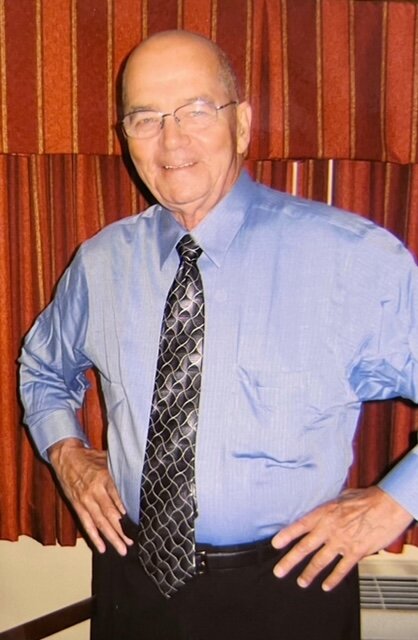 Please share a memory of Marshall to include in a keepsake book for family and friends.
View Tribute Book

Marshall Lee Coursey was called Home on December 27th, 2022.  He was born in Philadelphia, PA on November 5th, 1930 to the late Charles and Cecelia Coursey.  He spent many years living in Delaware before settling in Lafayette Hill, PA to raise his family. Marshall was an intelligent, charismatic, kind man who worked hard to leave his mark on his family, friends and community.

Marshall was the loving husband of Lillian, who passed in 2006; they met aboard the Wilson Line in 1949, where he worked as a purser, and were married the same year. He was the proud father of Linda (Yiaski) and Chris (Firman, 2018), as well as two sons who passed as infants. He was “Pop-Pop” to his five grandchildren – Nick (& Angela) Yiaski, Sandra Yiaski, Robin Yiaski, Chrissy (& Nick) Waldron and Michelle Myers – and to his ten great-grandchildren – Alyssa, Ricky, Misty, Fiona, Jordan, Grace, Julia, Peyton, Charlie and Arabella “Tootie” and he was brother to Melvin. Three of his brothers, his sister, and his son-in-law (Andrew Yiaski) were called Home ahead of him.  He loved his family dearly; he enjoyed spending time and talking with everyone, and he especially looked forward to his 7pm phone calls with Linda.

Marshall graduated from DeVry University and pursued a career as an electrical engineer. He worked many jobs as he attended school and built a life for his family – from mail delivery for USPS to working at Alan Wood Steel, and eventually retiring from C&D Power Systems in 1995. During his professional career, Marshall also volunteered within his community, namely as a founding member of Whitemarsh Ambulance and he is also a lifetime member of Barren Hill Fire Company. Marshall was active in church, growing up in the Indian Mission Church in Millsboro, DE, serving as a deacon of music at Olivet-Schwenkfelder UCC and volunteering at St. Peter’s in Lafayette Hill.

In his free time, Marshall loved rooting for the Phillies and the Eagles, playing the piano (and occasionally the church organ), taking trips on the Cape May-Lewes Ferry with his companion, Nellie DeJesus, and entertaining all with “Pop-Pop jokes”. He traveled for work during his time with C&D and loved re-telling stories of accomplishments and fun times with his co-workers. Marshall and Lil loved to travel and found favorite spots in Treasure Island, FL and Point Pleasant, NJ.  They made many family memories at the inlet during summer trips, and were the family glue for Thanksgiving and Christmas festivities at 503.  Places like “up country”, The Pub, and Boscovs will always mean something special in our world.

Marshall’s good-hearted humor and warm hospitality always created a comforting atmosphere that welcomed anyone to share a story and become a friend. He will be greatly missed by all who knew him.  We, his family, will continue to share his stories and keep his spirit going by working hard, taking care of those around us, and telling Pop-Pop jokes.

Relatives and friends are invited to Lownes Funeral Home in Lafayette Hill for funeral services on Monday, January 2nd.  Visitation begins at 10am, Service will begin at 11am, followed by his burial with Lil at Rose Hill Cemetery in Ambler, PA.

Out of concern and respect for our immunocompromised family members, we ask that all attending wear a face mask; we truly appreciate this consideration in helping to keep our family safe.  Disposable masks will be available.

To send flowers to the family or plant a tree in memory of Marshall Coursey, please visit Tribute Store
Print
Monday
2
January