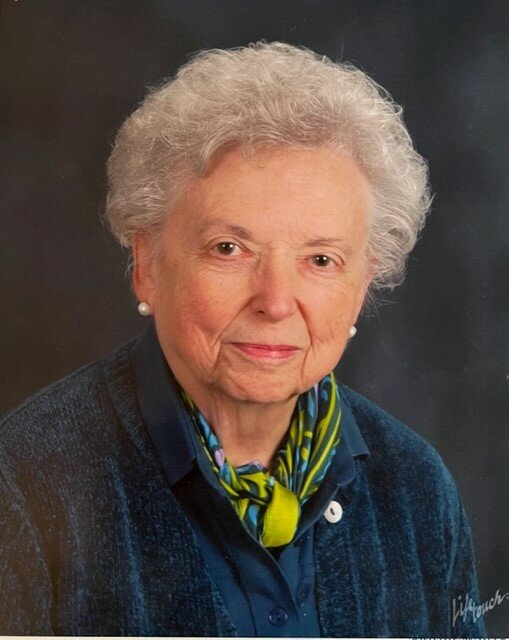 Please share a memory of Georgiana to include in a keepsake book for family and friends.
View Tribute Book

It is with great sadness we announce the passing of Georgiana M. Webber, 92, on September 27 th , 2022.
Georgiana was the beloved wife of over 50 years to the late Carl Samuel Webber. Born and raised in
Cincinnati, Ohio the daughter of the late Warren and Susanna Marvin. Georgiana and Carl lived in
Strafford, Pennsylvania for over 50 years.

Georgiana was educated at the Seven Hills Private School and the University of Wisconsin. Georgiana
was an accomplished pianist, harpsichordist, and orchid grower. She was also a long-time piano teacher
and avid knitter donating hundreds of handmade infant hats and scarfs to St. David’s Episcopal Church
for the benefit of Philadelphia’s needy children.

Georgiana served as the President of the Southeastern Pennsylvania Orchid Society and as a Judge for
the American Orchid Society. She lectured on orchid growing, appeared on local television shows, and
published the successful book “Anyone for Orchids?” Georgiana was a frequent participant at the
Philadelphia Flower Show where she received numerous awards related to her orchid growing and
membership in the Orchid Society.

She was a devoted wife, mother and grandmother who enjoyed spending time with her family. She is
survived by two sons, Edward Samuel Webber (Coleen) from Boston Massachusetts, George Webber
(Christen) from Wyndmoor, PA, and her brother Warren Burr Marvin (Janet) from Virginia. She was
preceded in death by her older brother Robert King Marvin.

Also surviving are her four grandsons, Nicholas Webber, Scott Webber, Keith Webber and Thomas
Webber as well as many nieces and nephews including her beloved niece, Mary Sue Martin.

A memorial remembrance will take place on October 15 th at St David’s Episcopal Church at 763
South Valley Forge Road in Wayne, PA. A family greeting will begin at 10am for a memorial service
at 11am. A reception will immediately follow at the church.

In lieu of flowers the family asks that you consider a donation to Saint David’s Church that will be
used specifically for their music department as Georgiana loved church music.

To send flowers to the family or plant a tree in memory of Georgiana Webber, please visit Tribute Store
Print
Saturday
15
October