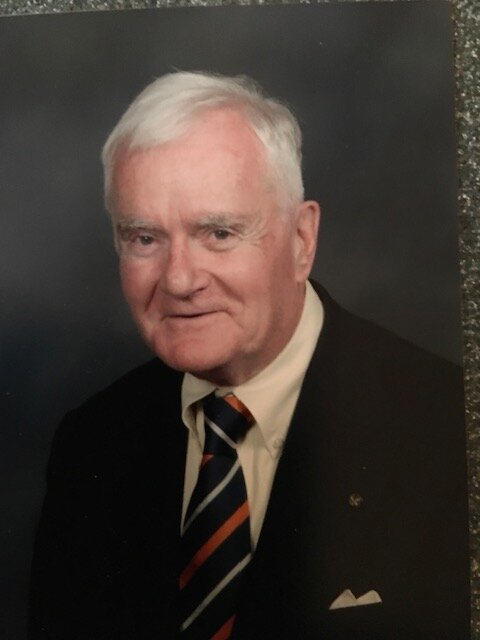 Please share a memory of Bill to include in a keepsake book for family and friends.
View Tribute Book

H. William Brady, “Bill” died on August 22, 2022 at his residence in Lafayette Hill, Pennsylvania; he was 92. The son of Harry Kidwell Brady, Jr. and Lois Tickle Brady, Bill grew up in Pittsburgh and graduated from Pennsylvania State University in 1951 with a B.A. in Commerce and Finance. He served in the U.S. Army for three years, in the infantry and Anti-Aircraft Artillery, and achieved the rank of captain prior to his honorable discharge in 1955.

Bill had a lifelong interest in the railroad industry, and his career path included positions at the Pennsylvania Railroad, the United States Railway Association and Conrail, where he served in various financial roles. He worked as a railroad security analyst on Wall Street for 8 years; during his tenure with Kuhn Loeb he assisted with the resolution of the bankruptcy of Penn Central and its 168 subsidiaries. He subsequently worked with the USRA in developing Conrail from the residual of six bankrupt railroads on the east coast, and then took a position with Conrail as the Director of Equipment Financing. Bill retired from Conrail in 1990, but maintained his interest in the railroad industry, including an extensive collection of books and memorabilia.

A longtime resident of Philadelphia, Bill moved to the Masonic Home in Elizabethtown in 2006, where he was often seen roaming the campus on his Segway. Bill was involved in his community, and was a member of the Philadelphia Securities Association, the Society of the Sons of St. George, the Philadelphia Athenaeum, the Pennsylvania Historical Society, St. Peter’s Church and the Union League of Philadelphia.  He served as the Treasurer of the J. Edgar Thompson Foundation for several years.  He had a wide circle of friends, with nearly 100 people attending his 90th birthday party.

An only child, Bill acquired a step-sister and brother-in-law when his mother married Reuben Miller in 1970. Bill embraced his role as uncle to his nephew and three nieces and was a beloved great-uncle of nine. He will be greatly missed by his family and his friends.

Bill will be interred in the Brady family plot in Wooster, Ohio, at a later date.

To send flowers to the family or plant a tree in memory of Bill Brady, please visit Tribute Store

A Memorial Tree was planted for Bill
We are deeply sorry for your loss ~ the staff at Lownes Family Funeral Home
Join in honoring their life - plant a memorial tree
Services for Bill Brady
There are no events scheduled. You can still show your support by sending flowers directly to the family, or planting a memorial tree in memory of Bill Brady.
Visit the Tribute Store
Print
Online Memory & Photo Sharing Event
Online Event
About this Event