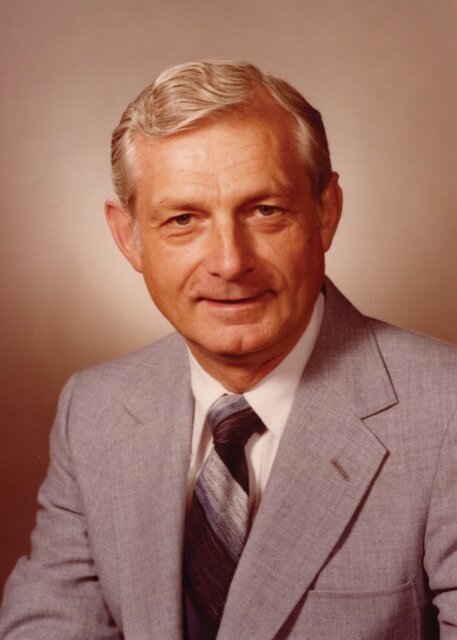 Please share a memory of George to include in a keepsake book for family and friends.
View Tribute Book

George Edward Eberwine, Jr. was born on June 28, 1925 in Philadelphia, PA. He was predeceased by his beloved wife of 73 years, Roseann Quinn Eberwine, his brother James and his sister Mary. He is survived by two daughters, Maryellen (Jack) McCarrick and Rosemary Eberwine, and two grandsons, John Patrick McCarrick and Kevin McCarrick.

George was raised in the Fairmount Park area of the city where he attended St. Francis Xavier grade school. And some of his fondest memories were how he and his brother, who were great sidekicks, enjoyed spending hours riding their bikes with their friends all over the neighborhood and playing in as many pickup baseball games as they could find.

George attended Roman Catholic High School, which he felt had majorly shaped his life endeavors; and he became a lifelong enthusiastic alumni. George graduated from Roman in June 1943 and immediately joined the Army Air Force to fight in World War II.

George was assigned to the top secret 36th Bomb Squadron of the 8th Air Force Command stationed in Cheddington, England and flying missions over Germany. In a book about the group, "Squadron of Deception: the 36th Bomb Squadron in World War II", published long after the war in 1999, author Stephen Hutton revealed the secrets of the 36th Squadron and features diary entries and recollections from these airmen, including George. Hutton calls them "Special men in special aircraft on special missions.”

On the outside the B24 Liberator aircraft flown by the 36th Bomb Squadron looked just like the other Liberators. However, on the inside, the aircraft had been stripped and redesigned to implement the most highly classified new electronic technology that turned the planes into flying Radar Counter Measure devices. And their missions still had to carry on even under the most hazardous weather conditions. When orders had to be issued for all other aircraft missions to ”stand down" because of high risk weather, the airmen of the 36th still dangerously flew.

Maintaining the complete secrecy of the 36th Bomb Squadron Radar Counter Measures Operations was so crucial that the airmen in the squadron were not allowed to tell anyone, not even their families back home, what their real operations were.

On the night of November 15, 1944, the 36th Bomb Squadron B24 Liberator carrying its nine man crew, including tail gunner Staff Sargeant George Eberwine, crashed on a field near Cheddington, England, during take-off. Upon impact, two crew members perished. George immediately tried to get out of the plane. However, he realized that one of his crewmates had leg injuries so severe that he couldn't walk. So George returned to get him and carried him out of the plane to safety.

After the war, George graduated from LaSalle College and started working for the Reece Corporation. In 1948 he married his high school sweetheart, Roseann Quinn. George was industrious and a hard worker who liked to keep busy working on things around the house and the yard. And he was always ready and willing to help someone else with anything they needed to have done or would just like to have done. And he was a perfectionist who accomplished everything with precision.

In the early 1980s, George was promoted to General Sales Manager of the Reece Corporation, which meant that his new office would be located at the company headquarters in Waltham, MA. However, instead of uprooting the whole family, with a move to that location, he decided to fly up to Waltham every Monday morning and fly home again Friday afternoon. During these years, he became a frequent traveler all over the world, representing Reece; and he made many international friends along the way. And also during these years as General manager at Reece, two grandsons were born, John Patrick McCarrick and Kevin McCarrick. So then, wherever he was traveling he was always thinking of his young grandsons and enjoyed sending them quite a collection of postcards and international mementos from everywhere he visited.

What George loved most through all the years was spending time with his family, from just the regular Sunday night dinners with the immediate family to larger major holiday celebrations with extended family, to backyard barbeques on summer holidays, to any kind of special occasion events.

And he especially enjoyed the yearly vacations with the family on the beach and boardwalk at the shore and the many trips he set up over the years for the family to travel together to their favorite places and places that they wanted to discover (lots of Disney World in that bunch and even one to Ireland!).

After George retired and didn’t have travel for work, he became a Eucharistic Minister at St. Philip's and a member of the Men's Prayer Group. And he enjoyed joining Roseann for daily mass in the mornings and then coffee and bagels at McDonald's and lots of sports conversations with friends.

In 2009 George was invited to travel to Ivinghoe, England to be a guest at a special ceremony on November 15, 2009 to honor the service and sacrifice of the airmen of the U. S. Army Air Force 36th Bomb Squadron that had crashed there on November 15, 1944, taking the lives of two crewmen.

George was amazed at the great appreciation still felt by the English people 65 years later for the aid of the American Air Force sent to Great Britain in WW II. After three days of ceremonies, the English people dedicated a memorial at the site of the crash.

And as George survived for 76 more years after the crash, he lived a life of integrity, love and profound gratitude... which we celebrate today.

To send flowers to the family or plant a tree in memory of George Eberwine, please visit Tribute Store
Print
Friday
8
April