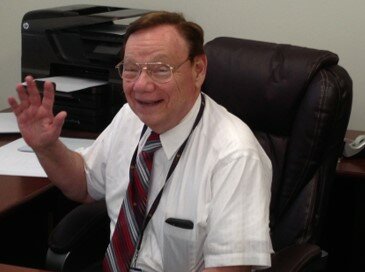 In addition to his loving wife, Celeste Chamberlain, John is survived by his son and daughter-in-law John C. Lewis, Jr and Victoria and his niece Cindy Lewis Proll and her husband Joe and children Matthew, Ryan and Tom.

John successfully balanced his higher-education administration career and countless curricular development and teaching experiences with a lifetime of public administration and community and church volunteering.

He advanced to become the Dean of Undergraduate Studies at West Chester University in West Chester, Pennsylvania from 1967–1982 where he initiated programs in baccalaureate nursing, criminal justice and an intern teaching program, chaired several University committees and served on several statewide task forces and contract negotiation task forces.

John blended his education background with his work in emergency medical services and pre-hospital care when he accepted the role of Director of Education at the Maryland Institute for Emergency Medical Services (original SHOCKTRAUMA) and chaired the Department of Emergency Medical Services at the University of Maryland at Baltimore County from 1982-1986.  He founded the Master of Science program in EMS with concentrations in Education, Management and Epidemiology and Research and transitioned from Associate Professor to Chair of Department during last two years of appointment.

In 1986, he transitioned to public administration as Executive Director of the Philadelphia Regional Emergency Medical Services Council and Director of EMS for City of Philadelphia.  Over the next four years he directed and developed the growth of a municipal system of pre-hospital delivery from basic life support (BLS) to a total advanced life support (ALS) system.  He provided general management and training for providers at all levels of public service learning and, as adjunct faculty, taught Emergency Medical Services Management in an evening/weekend format at Hahnemann University

For the next ten years, John chaired the Department of Arts and Sciences and the Program in Occupational Health and Safety at the School of Health Professions, MCP Hahnemann University, Philadelphia, PA. He served as the Director of a Multi-media Learning Project, and Program Director for the newly instituted Master of Science degree in Health Care Education Technology.  He held a concurrent appointment as Associate Dean for Academic Affairs, Evening, Weekend and Summer Sessions and developed the "Returning to School" workshop for the Adult Learner in the School of Health Sciences.

From 2008 to his retirement in 2013, John chaired the Department of Professional and Continuing Studies at Thomas Jefferson University, Philadelphia, PA.  He also served as the Director for Jefferson School of Health Professions’ Faculty Development Center.

John’s passion for Emergency Services started when he first joined the Yeadon Fire Company at the age of 16, rising through the ranks to serve as President and First Assistant Chief along with chairing the Ambulance Committee during his tenure. Yeadon Fire Company bestowed him with a lifetime membership for his years of service and contributions.

He continued his volunteer services with the Philadelphia Second Alarmers early in life as well and continued volunteering with this organization throughout his life.  His volunteer contributions to this organization included responding to a countless number of fires and disaster situations at all hours of the day and night. The running gear was always kept in the car ready to respond. He served as chief in1982 and then again in 1997 to 1999 during which time he wrote grants for financing a new response vehicle and other equipment with a goal to achieve long term sustainability for the organization’s future generations.

His other passion was based on his membership and involvement at St. Peter’s Lutheran Church in Lafayette Hill.  He served as Council President for several years, sang in the choir and in the annual Boar’s Head Festival, chaired the Safety Committee and worked collaboratively with Pastors Todd and Suloff to support and promote God’s work.  He developed and taught a bible study program for ten years.  He pursued his religious education at the Lutheran Theological Seminary at Philadelphia.

He and Celeste were staunch supporters of the Whosoever Gospel Mission and their efforts to help those in need of spiritual and social guidance.

John and Celeste treasured the many cats that shared their home. They also enjoyed going to auctions and antique shopping in Lancaster. John and Celeste were always searching for elusive vintage Shmoo items (a character from the Al Cap Lil Abner cartoon series) that John loved since early childhood. John loved fire trucks, Hess trucks and any other kind of truck.

John was most talented at refinishing furniture that was either purchased or found on the sidewalk someplace in Philadelphia. He had an eye for finding Philadelphia memorabilia and collectables.

Baxter, the 1953 Chevy Truck, was a cherished restoration project that became a member of the household and won trophies at every car show he attended.  Baxter was the “poster truck” at the several vintage car shows John and Celeste hosted at St. Peter’s Lutheran Church.

John’s sense of humor was a mainstay in his personal philosophy.  His puns and jokes brought happiness (and many groans) to all who knew him.  This and other wonderful characteristics have impacted and influenced so many across the years.  He was truly admired and will be greatly missed.

In Lieu of flowers memorial donations can be made to:

Please share pictures and notes through the message board.

To send flowers to the family or plant a tree in memory of John Lewis, please visit Tribute Store
Print
Saturday
7
May