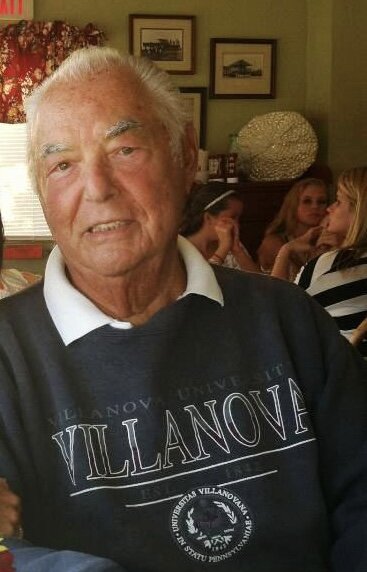 Please share a memory of Alfred to include in a keepsake book for family and friends.
View Tribute Book

Alfred P. Coletta, age 91 of Lafayette Hill, passed away February 2, 2022 in Naples Florida.  He was born on January 6, 1931 in Philadelphia and the son of the late Anthony V. Coletta and Julia (Laurelli) Coletta.

Alfred was born in South Philadelphia, where he worked at his family’s Italian market.  Al played football at Southern, and graduated Villanova University.  Alfred was an Army Veteran reaching the rank of Master Sergeant and served during the post Korean War. Upon his return from Germany, he married his childhood sweetheart Anita and raised four beautiful independent daughters.   Al owned the successful Mass Media Underwriters, an insurance management agency, in Lafayette Hill for over 25 years. Winning many awards for his service, he and his wife traveled extensively together often including his children on their worldwide adventures.

Alfred was an active member of St. Phillip Neri of Lafayette Hill and enjoyed making meals for Monsignor Vance.

His love of fishing brought the family to Long Beach Island, where they lived their summers by the sea.  Alfred was known for his bright smile, his warm heart and kind words of endearment.  He loved cooking for his family and often made his famous sausage and peppers for neighbors and friends.  Alfred’s blood ran “Blue” for his Villanova Wildcats and “Green” for his beloved Philadelphia Eagles.   He will be dearly missed by so many people.

Alfred is survived by his daughters Denise Coletta-Neuschwander (Vince) , Kimberly Davino (Richard) and Valerie Drake (James), along with this nine grandchildren, Erika, Christopher, BethAnn, Katie, Joseph, Robert, Charles Jr., Kendal, Nicholas and seven great-grandchildren.  Alfred is also survived by his fiancée Carol Getz, who shared the last eleven years with him enjoying the sun on LBI and Naples Florida. Al was also survived by Karen's husband Albert DeGennaro.  Al would often say that Albert was the son he never had.

Services will be held on Saturday February 12th.  Visitation will begin at 9:30am at Saint Philip Neri Church 437 Ridge Pike, Lafayette Hill with a Funeral Mass immediately following at 11AM.

Burial will be private.  In lieu of flowers, the family suggests donations be made in Alfred’s name to St. Phillip Neri church in Lafayette Hill or to the Wounded Warriors.

To send flowers to the family or plant a tree in memory of Alfred Coletta, please visit Tribute Store
Print
Saturday
12
February