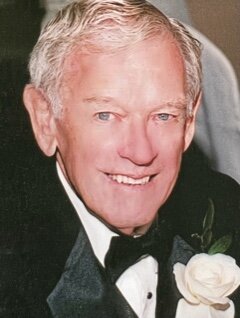 William T. Cole, Jr. (Wink), age 92 of Plymouth Meeting died Wednesday morning, December 7, 2021, with his children by his side after a brief illness.

He was a devoted husband of 60 years to his wife Marguerite (Hildwine) Cole, who passed away in 2015.  He was born in Roxborough, PA on July 12 ,1929, and graduated from Roxborough High School.  Bill served as Corporal in the U.S. Army and was stationed on Okinawa Island during the Korean War. Bill started a career in sales at WHAT Radio Philadelphia in the late 1950s. He was a Sales Executive for 3M and Savin corporations during the 1960s and 1970s. In 1982, Bill started Cole Copy Systems, which was located on the corner of Fayette St. and 1st Ave. in Conshohocken for many years. The company is still in operation today as East Coast Laser, and it is run by his son, Steven.  Bill loved to talk sales and business, and he once came upon a good deal on a truckload of potato chips he sold for fun (and a profit).

Bill and Marge were longtime residents of Plymouth Meeting and members of Mermaid Lake Swim Club. They enjoyed many overseas trips and visits to Florida, summers with family in Avalon and Maine, and golfing. Bill was a single-digit handicap golfer and golf course rater for Golf Digest Magazine, rating over 400 golf courses in his retirement.  During a practice round at Rolling Turf Golf Course in Schwenksville with his grandson in 1993, Bill hit a hole-in-one on the 10th hole.  He had clearly made the green but unable to locate his ball, he took a mulligan off the tee for a second shot — and miraculously — a second hole-in-one!

He is survived by his brother, Michael Cole; and by his children, Susan Hersh (Tom), Barbra Vellani (Steve), Jennifer Cole, William T. Cole III, Jane Feulner, and Steven Cole; along with his grandchildren, Daniel, Sarah, Emily, Tessa, Moriah, Erica, Austin, Haley, Richard. He is also survived by 10 great-grandchildren and many nieces and nephews.   He is preceded in death by his wife Marguerite, his parents, William T. and Elizabeth Cole; his brother, Richard Cole; his sister, Elizabeth Skipjack; his son-in-law, Jeffery Feulner and his daughter-in-law, Dawn Cole. Relatives and friends will be received on December 11, 2021, at St. Phillip Neri, 437 Ridge Pike, Lafayette Hill, PA 19444, from 1:00pm-2:00pm with Mass of Christian Burial following at 2:00PM. A private interment will be held at The National Veterans Cemetery located in Washington Crossing, PA.

To send flowers to the family or plant a tree in memory of William Cole, please visit Tribute Store
Saturday
11
December

Share Your Memory of
William
Upload Your Memory View All Memories
Be the first to upload a memory!
Share A Memory
Send Flowers
Plant a Tree