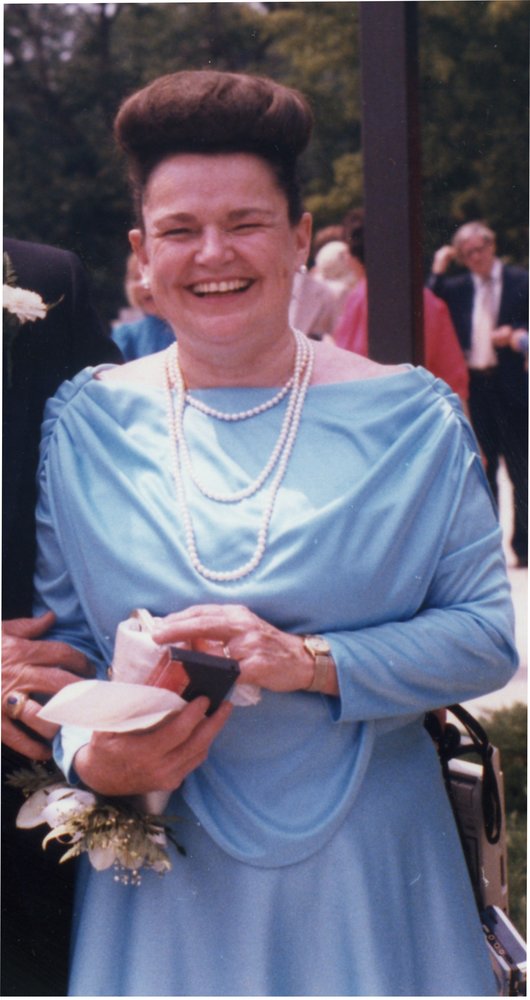 Please share a memory of Roseann to include in a keepsake book for family and friends.
View Tribute Book

Roseann Clare Quinn Eberwine was born on August 19, 1926 in Philadelphia, PA, the daughter of Dominick Quinn, who hailed from County Donegal, Ireland,  and Ellen Walsh Quinn from County Mayo, Ireland. Roseann inherited both the charming friendliness of her gregarious father and the kindness and graciousness of her lovely mother.

As a child, she attended St. Francis Xavier grade school, right down the street from her house in the Fairmount Park area of the city. Her house was also very close to the Philadelphia Art Museum where, while growing up,  she spent many long hot summer afternoons enjoying the breezy natural  coolness of its halls and all the treasures within its walls.

Roseann attended John W. Hallahan Catholic Girls High School, where she held offices on the student council. And while in high school, she started dating a handsome young fellow named George Eberwine who attended Roman Catholic High School. After high school, while George immediately joined  the US Air Force and flew highly secretive radar jamming missions over Germany in World War II, Roseann went to work at the International Upholsters Union as a top notch stenographer for its executive officers.

After the war, Roseann and George were married in 1948 at St. Francis Xavier Church and lived in Philadelphia for the next 7 years, while becoming the parents of two daughters, Maryellen and Rosemary.

They then moved upstate to Dallas, Pennsylvania for the next seven years. In Dallas they belonged to Our Lady Gate of Heaven parish where Roseann became a leader in the Confraternity of Christian Doctrine and hosted many meetings of the group in her home. And she enjoyed taking her daughters to nearby Harvey’s Lake for swimming in the summers and ice skating in the winters.

Then in 1962  Roseann and George returned to the  Philadelphia area, and chose to make their permanent home in Lafayette Hill where they became very active members of St. Philip Neri Parish. And once returned to this area where their families on both sides were in close proximity, or just a short drive away, Roseann couldn’t wait to be able to host all of their extended families on both sides for holidays throughout the year. This tradition lasted for many years, and Roseann was a remarkable hostess who loved having these celebrations. She had a wonderful talent for always making it look so easy and effortless to pull together these events. She was an excellent planner and a great organizer who always was able to prepare well in advance for these celebrations and for everything else in her life.

And she came to be a traveler to many places all over the world with George as he carried out his role as the General Manager of  the Reece Corporation. During these years they also welcomed into their family two grandsons, John Patrick McCarrick and Kevin Sean McCarrick.

Roseann also became a tipstaff at Montgomery County Courthouse for a number of years, and she enjoyed the experience of her work there and also the camaraderie with her co-workers.

Over all her many decades in St. Philip Neri parish, Roseann loved to attend 8:30 mass every morning and have breakfast bagels with friends after the mass.

She was a beloved wife, mother, grandmother, sister, aunt, cousin and friend.

To send flowers to the family or plant a tree in memory of Roseann Eberwine, please visit Tribute Store
Tuesday
20
July

Share Your Memory of
Roseann
Upload Your Memory View All Memories
Be the first to upload a memory!
Share A Memory
Send Flowers
Plant a Tree