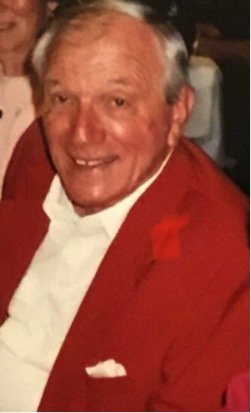 Please share a memory of Michael to include in a keepsake book for family and friends.
View Tribute Book

Michael Edward Smith, of Lafayette Hill, entered his heavenly home on April 23, 2021 at the age of 87. Mike was born September 7, 1933 in Philadelphia, Pennsylvania. He entered into marriage with Judith Barone Smith on November 4, 1977, and celebrated 42 loving years before Judy preceded him in death on November 9, 2019. Mike is survived by his siblings, step-children, seven grandchildren and fifteen great-grandchildren.

After graduating high school, Mike served his country as a member of the U.S. Army.  He then served his community as a member of the Philadelphia Police Force. An avid golfer and spectator, Mike ended his working years as the Caddy Master for Whitemarsh Valley Country Club before retiring and becoming a “snow bird”, spending his summers in Lafayette Hill and his winters in Pompano Beach, Florida.

Mike was a devout Catholic and prayer warrior, praying daily for his family, his church, his friends, our country and leaders.

A Funeral Mass will be held on Friday, Apr 30 at 11:00 AM at Saint Philip Neri Church 437 Ridge Pike, Lafayette Hill

Interment will be held privately.

To send flowers to the family or plant a tree in memory of Michael Smith, please visit Tribute Store
Friday
30
April

Share Your Memory of
Michael
Upload Your Memory View All Memories
Be the first to upload a memory!
Share A Memory
Send Flowers
Plant a Tree