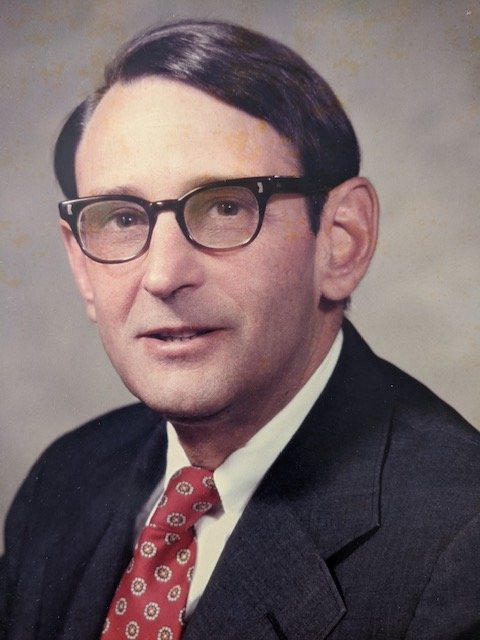 Please share a memory of Newbold to include in a keepsake book for family and friends.
View Tribute Book

Newbold (Newby) Strong died Thursday, December 17th, one day after celebrating his 92nd birthday, at home in Lafayette Hill. He was the son of Ethel Newbold and George Vaughn Strong. He was extremely close to his dear Aunt Bab who helped raise him following the death of his mother. He had a brother, George, and three sisters- Virginia Newlin, Sally Moffly, and Merweather Ely. He is survived by Virginia. The Strongs lived in Chestnut Hill and spent their summers in Beach haven, NJ where Newbold developed his love of sailing at Little Egg Harbor Yacht Club.

He married Anne (Nancy) Shippen Ashton (aka his Golden Girl) and they continued the tradition of summers in Beach Haven while their children shared their love of water. Nancy pre-deceased Newby in May 2020 and she took his heart with her. He could not wait to join her in eternal light. They enjoyed almost 70 years together as they raised their four children and took great pride in their nine grandchildren and two great grandchildren. William Ashton (Sue), Anne Pepper Killough (Steve), Sally Hall Wolgin (Roy), and Juliana Meryweather Karnavas (Andrew) grieve the loss of their father and are so grateful for the values he instilled in each of them. Newbold was a man of integrity. He placed high value on education and work and was devoted to his family and friends.

Newbold attended Chestnut Hill Academy, the Fay School, St. Marks School, and Princeton University. He served in the Pennsylvania National Guard where he was honorably discharged as a First Lieutenant. He loved his Princeton Tigers and was extremely grateful for the education that prepared him so well and introduced him to treasured lifelong friendships. While at Princeton he played on the club hockey team and was a member of Cottage Club.

He started his business career as a buyer-trainee at John Wanamakers and that job served as a launching point for his ultimate career as an Investment Broker. In 1956 he joined Dehaven, Townsend, Crouter, and Bodine as an investment trainee but within a few years became partner. In 1960 he joined Smith Barney where he enjoyed a successful 44 year career specializing in retail and institutional account management. Throughout his tenure at Smith Barney his clients benefited from his intelligence and an unwavering commitment to service. He was a valued colleague and mentor to many young professionals. He “retired” from the firm in 2008 but this did not last long as he soon had the opportunity to join Pennsylvania Trust as a Senior Portfolio Manager where his years of experience were so valued by his colleagues and clients. He stepped back from active portfolio management in 2016 but never abandoned the investment business. He loved being an investor and maintained active research contacts and dynamic conversations until the end of his life. Newbold was civic-minded and served on the boards of many institutions which included Colorcon, the Chestnut Hill Community Association, Christ Church in Philadelphia, Coriell Institute for Medical Research, the Philadelphia Scholars Foundation, Little Egg Harbor Yacht Club, Springside School, and the Webster Lagoon Association. He was proud of his leadership role in co-chairing the Springside capital campaign in the early 2000s which raised funds for the Upper and Middle Schools as well as funding a new field house. Newbold was an avid golfer at Sunnybrook and Merion and a fierce competitor on the tennis court. He will be greatly missed by all who know him, but especially by his family.

In lieu of flowers, the family requests that contributions in his memory be made to Saint Paul’s Episcopal Church in Chestnut Hill and Springside Chestnut Hill Academy.

To send flowers to the family or plant a tree in memory of Newbold Strong, please visit Tribute Store

A Memorial Tree was planted for Newbold
We are deeply sorry for your loss ~ the staff at Lownes Family Funeral Home
Join in honoring their life - plant a memorial tree
Services for Newbold Strong
There are no events scheduled. You can still show your support by sending flowers directly to the family, or planting a memorial tree in memory of Newbold Strong.
Visit the Tribute Store

Share Your Memory of
Newbold
Upload Your Memory View All Memories
Be the first to upload a memory!
Share A Memory
Send Flowers
Plant a Tree