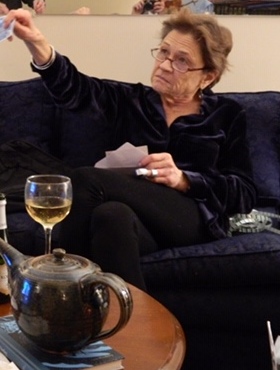 Please share a memory of Dale to include in a keepsake book for family and friends.
View Tribute Book

Dale looked to celebrate her 69th birthday on May 10, 2020, and planned to retire from her beloved job in early 2021. She was practicing yoga in her living room when she was struck with a fatal heart attack. She had no history of heart problems and tested negative for the Covid-19 virus. Her exemplary life will be celebrated by family, friends and admirers later this summer in Philadelphia.

The recipient of two successful kidney transplants, Dale led a life that was so much more than simply beating 1-in-ten-million medical odds. She was a hard-working, bright star in her inner-city, mixed-class neighborhood, and a strong devotee of the cooperative food movement. Dale purchased, unpacked, inventoried, and sold a wide variety of staples in the Mount Airy co-op store for 39 years. She managed several sections of the non-profit, member-owned business. Along the path to delivering healthier, cheaper and safer foods to consumers, Dale earned wide professional respect, forged dozens of strong friendships, and gained deep admiration among the co-op’s 10,000-plus members households.

Dale suffered double kidney failure in 1984. During her initial journey through the life and death trauma of kidney failure, a local film-maker documented Dale’s struggle in a short black and white film that aired on public TV. Despite being dependent on thrice weekly dialysis treatments for several years, Dale never allowed the three-hour blood-cleansing ordeals to dampen her desire to live a fulfilling, exciting life. She visited Maine, California, Assateague Island and the Jersey Shore lugging heavy plastic sacks of transfusions to pursue her immediate hopes. As she approached the first kidney transplant in the 1986 – long before “GoFundMe” campaigns – co-op staff and members raised more than $10,000 to support medical expenses related to her operation and recovery. Dale suffered a second kidney failure in 2006, and three years later, after more struggle with stressful dialysis, she received a second successful transplant at University of Pennsylvania Hospital. She returned to work at Weavers Ways just as soon as doctors permitted. Less fortunately, Dale remained dependent on strong anti-rejection medicines -- with harsh side effects -- for the remainder of her life.

Dale received her primary and secondary education at the Springside and Stevens School in Chestnut Hill, Philadelphia. In these all-girls settings, Dale started to build a network of loyal friends that she vigorously cultivated throughout her life. She was a member of the Roxborough Presbyterian Church, where she attended with her Mother, Betty L. (Propert) Kinley, who was an accomplished artist and mother of two in upper Roxborough. Dale’s Father, David Kinley Jr., was an estate planning lawyer and Common Pleas Court Judge in Philadelphia, and a decorated veteran of World War II – serving in the US Army Air Force 1944 campaign against Nazi Germany.

From early childhood through adult years, Dale -- together with her husband, Len Byron of Philadelphia – regularly vacationed at the historic Ocean Grove, N.J. Special holidays were often shared with the Propert family residing near the Atlantic shore towns. More wonderful summers were spent in Bass Harbor, Maine, Eagles Mere, PA, Stone Harbor, NJ, San Francisco, CA, and the Hill House and Cricket Club swimming pools in Chestnut Hill. Once she regained control over her wavering health after the second transplant, Dale and Len couldn’t be slowed from adventuring throughout Western Europe – from Ireland to Hungary – adding a global chapter to her book of personal growth and memories.

Dale’s journeys fueled a rich inner-soul that radiated kindness, empathy, caring, love, and generosity – the very traits conveyed in the miraculous Beatles music that Dale relished on the spinning vinyl platters of her teenage record turntable. Many rock-and-roll inspired parties ensued at the wooded Kinley home in “Murder Hollow,” and Dale was the co-host of these lively encounters over many years with young local friends. Dale became an avid reader and consumer of news, history, and cultural treasures of the wider world.

She never ceased studying and learning from other’s experiences cast through art, drama, music, and literature – no matter difficult were her physical health and spiritual challenges. Dale’s modest and satisfying life always remained centered on work at the food co-op. Even when the dreaded Covid-19 pandemic spread into Philadelphia, Dale was reticent to abandon her post at the ordering desk in the basement of Weaver’s Way. After a five-week sick leave, she returned to work on May 4 for what would prove to be her final 2 days at her beloved community store. Fortuitously, she passed away in peace and harmony in the comfortable home shared so joyfully with Len Byron.

Dale is survived by Len, her husband of 14 years, her brother David Kinley III, presently of Philadelphia, mother-in-Law, Kay Byron of Chestnut Hill, and cousins, Steve and Jeff Propert and their extended families.

A graveside burial service for family is planned for Summer 2020 at Laurel Hill Cemetery in Bala Cynwyd, PA., and a larger memorial service is envisioned for close friends and admirers later this summer.

In lieu of flowers, donations in Dale’s memory should be directed to her favorite charities including:

Inquiries may be addressed to:

David Kinley III and Len Byron in Philadelphia; and

To send flowers to the family or plant a tree in memory of Dale Kinley, please visit Tribute Store

A Memorial Tree was planted for Dale
We are deeply sorry for your loss ~ the staff at Lownes Family Funeral Home
Join in honoring their life - plant a memorial tree
Services for Dale Kinley
There are no events scheduled. You can still show your support by sending flowers directly to the family, or planting a memorial tree in memory of Dale Kinley.
Visit the Tribute Store

Share Your Memory of
Dale
Upload Your Memory View All Memories
Be the first to upload a memory!
Share A Memory
Send Flowers
Plant a Tree