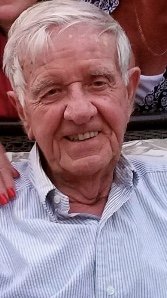 John proudly served our country during the Korean War in the United States Army. John is a college graduate of LaSalle University and became a successful management consultant and then found additional success as a retail entrepreneur.

John was a devout Catholic. He loved God and his family above all else, his wife beyond measure.   The two could jitterbug dance better than anyone else.  He traveled abroad and to many wonderful destinations throughout his life.  However, most of all he enjoyed spending winters with his wife in Long Boat Key, Florida and summers with her in Avalon, New Jersey.  He was an avid golfer and enjoyed fishing on his boat, “Daddy’s Girls.”   He also enjoyed a good football game, especially if the Philadelphia Eagles were playing.

His faith and optimism knew no bounds.  Perhaps that explains why many family and dear friends sought his sage advice.  No matter the task, his approach was to get organized, think it through, and execute with a smile.  He was thoughtful and kind to so many that were lucky enough to cross his path.

Due to the unprecedented global events, a private funeral service, Mass and internment will be held on Tuesday, April 21, 2020.

In lieu of flowers, please donate to a charity of your own choosing.