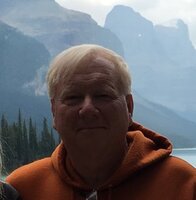 Robert Charles Bisbing passed away peacefully on Sunday, November 21, 2021 at the age of 71 years young. He was a scientist and a naturalist through and through and throughly reveled in the outdoors whenever he could be there. He spent his days in his yard tending every inch of his beautiful garden, rearranging and pampering his pond, and watching the animals who came to enjoy it. He loved long backpacking journeys with friends in earlier days and sightseeing adventures to National Parks and other natural areas in later years. He loved to travel throughout the United States and abroad seeing the places he had read about in history books, exploring places he learned about from documentaries, and experiencing the world in his own shoes.
An avid photographer, Bob was rarely seen without camera in hand when hiking or traveling. His photographs were amazing, mostly of vistas, flora, and fauna he enjoyed along the way. It was not unusual to find him even in the backyard taking pictures of a flower that had just bloomed or a snake sunning himself on a rock. He loved his pets, a menagerie too numerous to name.
Bob was a problem solver of all sorts. Give him a problem and he would ponder it, research it, tinker with it until it was solved. He had a way of thinking that was nearly always “out of the box” and that helped him see the world in a way most of us did not. He was clever, smart, witty, personable and most of all humble and non-assuming. Bob was Bob and was quite content with that.
Growing up on the lower edge of Frankfort in Philadelphia, he’d been seen playing ball in the empty lot across the street from his home with the neighborhood kids, many of whom where his cousins. He graduated from Frankfort High School, went to Philadelphia Community College and graduated in 1973 with a Bachelor’s of Science degree in Biology from Temple University. He completed his Master’s degree at Villanova University in the field of Environmental Ecology. He worked as an agricultural research scientist at Pennwalt Corporation, Ecogen BioTech, and later Rohm and Haas Chemicals.
Bob is survived by his wife of 41 years, Susan, and his daughter, Teagan, with whom he shared so much throughout their lives together. We say good-bye to you, Bob, but know you remain in our hearts and in our souls until we join you somewhere out there in the universe among the woodlands, in the seas and rivers, and among the stars. We all so LOVE you.
In leu of flowers, donations in Bob’s memory can be made to:
Chimp Haven
13600 Chimpanzee Place Keithville, LA 71047
https://chimphaven.org/give-today/
“Chimp Haven is the world’s largest chimpanzee sanctuary. Located on 200 beautiful forested acres, the sanctuary is dedicated to providing the very best life for more than 300 chimpanzees formerly used in biomedical research and working with urgency to bring those still waiting in research facilities home to sanctuary.” Chimp Haven is a 501(c)3 tax-exempted charitable organization (TIN74-2766663)

Due to the increasing number of covid cases, the family has decided to cancel the reception in order to keep everyone safe.