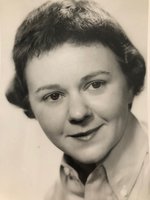 An award-winning Pennsylvania journalist and corporate communications specialist, Janet Ann (Miki) Mahoney, died Saturday, December 28, in Bryn Mawr Hospital. She was 92 years-old and had been living in the Brandywine retirement community in Haverford until suffering a stroke on the day before Christmas. In the late 1940s and throughout the 1950s, the “women’s desk” was a feature of newsrooms across the country despite the heroic work of women journalists during World War II, both on the home front, where they took up the beats of men fighting in or covering the war, and, in more than one hundred cases, as war correspondents themselves. But stepping boldly out from behind that desk at the Erie Daily Times, Ms. Mahoney, a convent-school educated reporter broke the old mold of “sob sister” and “agony aunt” to write general news and feature articles that led to her being named Outstanding Newspaper Woman of the Year in 1955 by Pennsylvania Women’s Press Association. Ms. Mahoney moved to Philadelphia the next year, working first as a reporter for Philadelphia Daily News and then as a reporter for the Philadelphia Evening Bulletin. In 1959, she joined the staff of the then Philadelphia-based Ladies’ Home Journal as a writer on public affairs. When the Journal editorial offices moved to New York in 1961, she became a general assignment reporter for the Philadelphia Inquirer. Her newspaper career included the coverage of the sensational first murder trial of neurologist Sam Sheppard, who was convicted and later acquitted of his wife’s death, as well as political campaigns and state visits of royalty. Ms. Mahoney spent the second half career in corporate communications, as well as heading her own consulting firm, Miki Mahoney Associates, for five years in the 1970s. She worked for the pharmaceutical company Smith Klein & French, the Franklin Mint, the advertising firm Lewis &Gilman, the Campbell Soup Company, and G.E. Capital. She won the 1980 Pepperpot Award of the Philadelphia chapter of the Public Relations Society of America (PRSA) and the 1981 Clarion Award given by Women in Communications for the Taste of Philadelphia, a public relations program for Campbell’s where she was a senior manager. As the soup company’s loaned executive to the United Way of Camden County, she led a team that finished first in fund-raising for the 1989 campaign. Janet Ann Mahoney, the daughter of Timothy J. Mahoney, a lawyer, and his wife, Arvilla Renz Mahoney, was born Erie, PA, on September 1, 1927. A graduate of Mercyhurst Seminary/Preparatory School, she studied at Marymount College in Los Angeles (now Loyola Marymount University) and at the Sorbonne in Paris before receiving her Bachelor of Arts degree from Marymount College in Tarrytown, NY (now Marymount College of Fordham University) in 1949. She was a member of the PRSA, the International Society of Business Communicators, the American Institute of Wine and Food, and the Junior League of Philadelphia. Upon her retirement, she lived for a number of years in Annapolis, MD. Ms. Mahoney is survived by her nieces, Megan L. Mahoney and Danna M. Nehrbas of Villanova, PA, and Leslie S. Troutman of Osprey, FL; her nephews, Timothy J. Mahoney III of Philadelphia and Kevin H. Mahoney of Cheney, PA; her grandniece, Tessa J. Mahoney; and eight other grandnieces and grandnephews. A memorial Mass of Christian burial will be held at 11:00 a.m. on Thursday, January 2nd, at St. John Vianney Church, 350 Conshohocken State Road, Gladwyne, PA. Burial will at Calvary Cemetery in Erie.